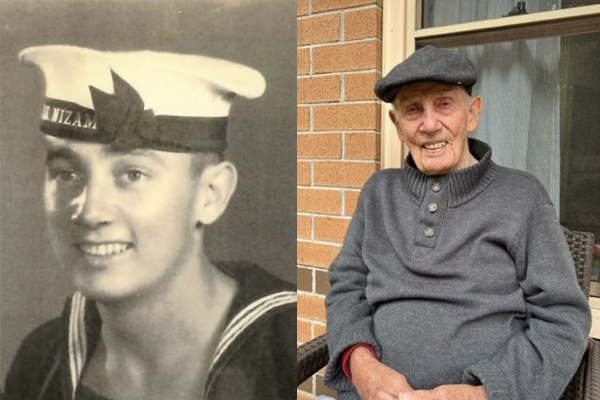 Every resident has a story. All have lived rich lives full of incredible moments and achievements that have formed the basis of awe-inspiring memories to tell the grandchildren. This is perhaps most relevant of our Regis Rose Bay resident, Ronald Young, who recently turned 100, and spent several years in battle protecting his homeland.

In July 1940, when Ron was 18, he enlisted in the Royal Australian Navy (RAN). He became qualified in gunnery and was promoted to able seaman in June 1941 where he proudly served his country in the Mediterranean and Asia-Pacific theatres of war.

After Ron’s initial training at Flinders Naval Depot in Melbourne, he was dispatched to join the cruiser HMAS Sydney, which was serving in the Mediterranean. Halfway across the Indian Ocean, en route to his posting, he was told that he was now instead being transferred to the destroyer HMAS Vendetta. Ron was initially disappointed, however as fate would have it, it turned out to be a fortuitous change in circumstance for him as sadly Sydney was lost with all those aboard off the Western Australian coast in November 1941.

Ron served as a gunner on the HMAS Vendetta as the destroyer undertook escort and patrol work, participating in the operations connected with the Greece, Crete, and North African Campaigns during November 1940 to October 1941. He next served on the HMAS Nizam, undertaking duties on this destroyer into August 1943. In April 1944, Ron was posted to HMAS Australia and served abroad this heavy cruiser until May 1945.

In October 1944, Australia was one of the warships attached to the US Seventh Fleet which supported the American invasion of the Philippines. Australia provided bombardment support for these landings on 20 October, and Ron was right in the thick of the action serving in B turret. At 6.05am the following day, Australia was struck by a Japanese Kamikaze aircraft and Captain Dechaineux and 29 other officers and ratings were killed or died of their wounds, and 65 other crew were wounded.

After repairs, Australia was back in action by early January 1945 in the Lingayen Gulf covering the Allied invasion of Luzon Island, and was subjected to repeated Japanese Kamikaze attacks. This included being hit on 5, 6, 8, and 9 January, losing three officers and forty-one ratings killed, with one officer and sixty-eight crew wounded. This was the last action that Australia was involved in during the war.

Two of Ron’s lifelong friends were Max Brown and Albert Morgan, both now deceased. Ron, Max and Albert all enlisted in the RAN on the same day in 1940 and served together during the war. Able Seaman, Keith Mills was another good friend, who sadly didn’t come home from the war.

In March 1945, Ron married his sweetheart Rita Lois, and they were blessed with 5 children. Rita sadly passed away in 2013. Ron now has 9 grandchildren and 14 great-grandchildren.

After his war service, Ron worked as a publisher at The Daily Telegraph and then at The Australian until his retirement at aged 60. He enjoyed fishing trips and was part of the 18 Footers Sailing Club at Double Bay. These days, Ron participates in the activities held at Regis Rose Bay, listens to music and goes for short walks.

Ron credits his long life to surrounding himself with a loving family, good genes and a healthy diet.